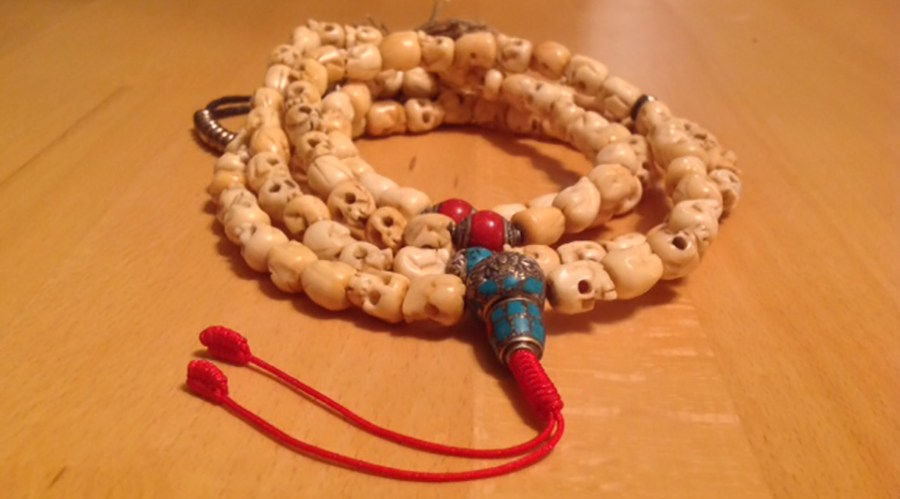 The Mala or Threngwa in Tibetan is such a simple and beautiful meditation support. It is one thing that unites all Buddhist traditions, and even some other religions. I started learning about Malas during my first mandala offering practice when I was buying stones I had just broken my mala as I finished my Vajrasattva practice. I bought some beads as and learned to tie the knots and thread the beads. Now it’s really fun to make or repair Malas and useful for all the friends in my Buddhist centre who are in need of a repair or tune-up.

Let’s start with all the parts of the mala and what better place to start with than the Stupa. 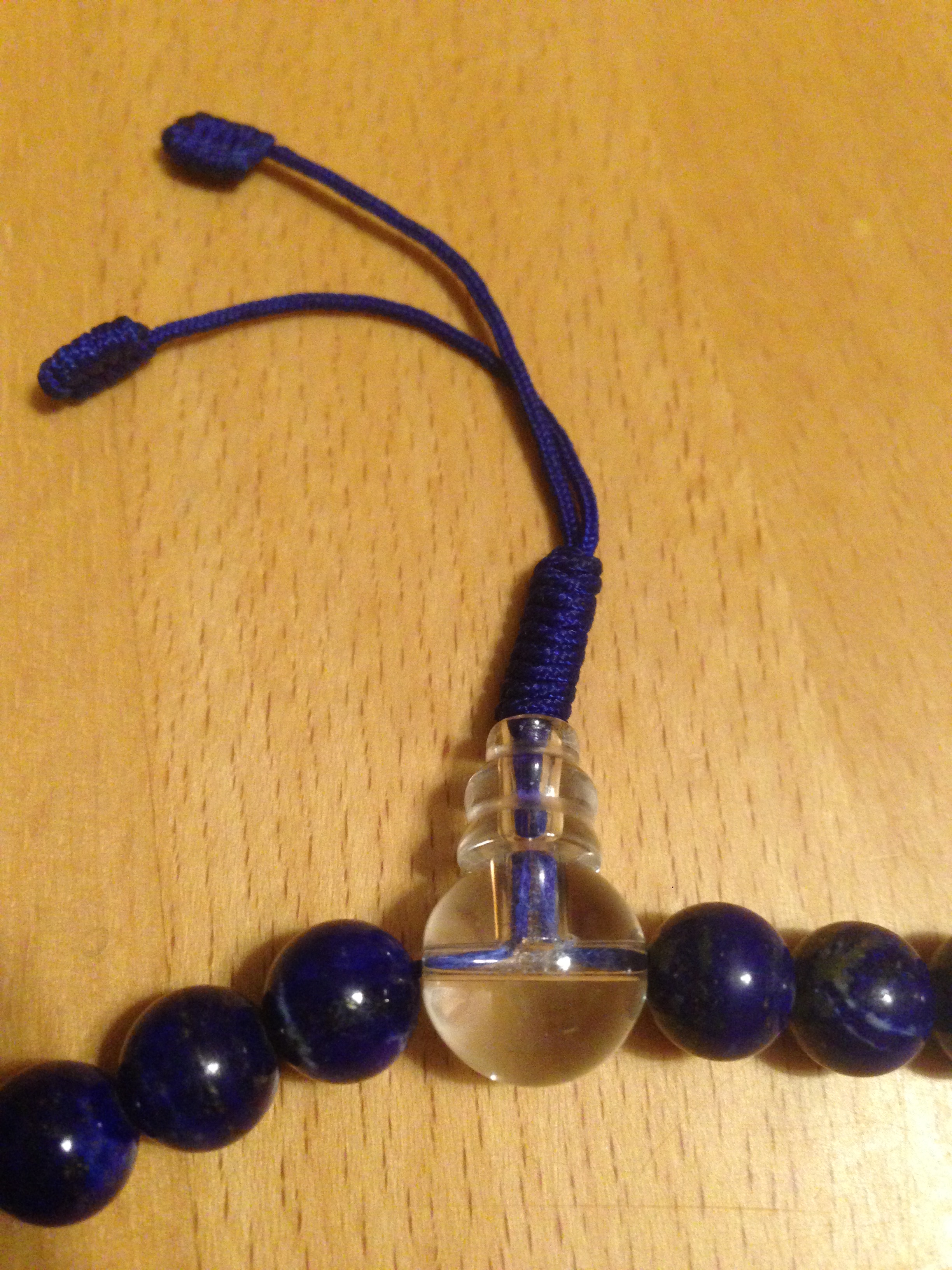 The stupa or the conical part at the centre of a Mala. It stands for wisdom which recognises emptiness. The conical shape is emptiness itself, it symbolises having removed the veils that hides minds true nature. The Realisation of no ego or no self allows all the inner qualities which are inherent in our mind, to have a chance to express themselves. When the ego is lost when all the energies that are tied up in liking and disliking, hoping and fearing and thinking of the past and the future are liberated, we relax and all that powerful energy becomes a great joy. Suddenly one is fresh and joyful and all is meaningful. The Guru Bead represents this great joy and freedom that arises when we are free from all our trips and games. The bigger the bead the bigger the joy.
The blessing or protector knot tied above the Stupa is a way to remind the mind of its inherent qualities and attach positive energy to things. It is said that the worst demons can open up 6 of the knots but not 7. The knot symbolizes that you are immune to all kinds of negative attacks, as the mala is thought of as having a protector like quality. Protector knots carry the enlightened energy of the Lamas. When they blow on the knots to bless them, the Lama would visualise the Buddha or awakened energy of the Buddha that they are transmitting in their heart and blow little buddhas into the knot that stay there.
Every mala needs a string, a tight string is good for short mantras and a loose string is good for long mantras. A thicker string gives the mala a soft and luxurious feel as the beads slide between the fingers. Malas can also be made to be adjustable, this comes in very handy if you have a few different practices. Many practitioners have Abacus like counters attached between the 10th and 11th beads, symbolising the 10 Bodhisattva levels. If you have two sets of counters they come after the 20th beads on each side of the Guru bead. With four counters one can count over a million mantras on the mala, that is of course if you don’t lose your place over time. Some Tibetans even decorate their mala with tiger hair or skin as a source of power, and some even were the mala on the wrist or around the neck as a piece of jewellery.
A mala normally has 108 beads, the number 108 is very auspicious throughout all Hindu and Buddhist traditions. For example, there are 108 Upanishads, Hindu Deities, temples of Vishnu, and 108 energy lines converging at the heart chakra. In the case of the mala 108 represents the 8 levels of awareness that awaken to become a super, all-pervading, or intuitive consciousness. It is also said during this awakening 42 jovial Buddhas and 58 Buddhas with critical intelligence awaken in forehead chakra. The last 8 beads represent the 8 Bhodisattva levels that are attained resulting in enlightenment. Depending on some teachings there are 8 or 10 levels.
There are also wrathful or Ngrondro malas with 111 beads, and that means you need to do 1001 malas to exactly reach the 111,111 traditional repetitions. Sometimes these extra beads are for keeping track of how many mantras you have done at the 1/4, 1/2 and 3/4 point on the mala. They can help If you get tired during the meditation and the mala falls down on the floor, the different beads help you stay a little more focused and they are sometimes called Buddha, dharma, and sangha beads. Hand malas are also very popular for use while doing prostrations. The mala stays just below your knuckles and you slide from bead to bead with your thumb. These malas have only 27 beads or 1/4 the length of a normal mala.
The beads can be made from a myriad of different materials including many types of wood, metals, and semi-precious stones. There are even some exotic materials like skulls or bone that are said to be used for protective meditations. 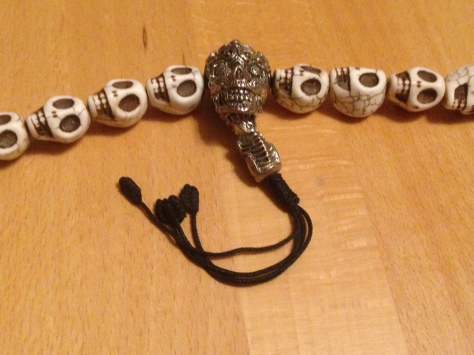 Probably the most common malas we find are lotus malas, the seeds are from a pear tree that grows in China, they are great because they hold any type of energy so you can use any mantra with it. Even the 16th Karmapa is known to have said that they are the best. They are pleasant and they stay warm. The Bo Tree mala or Bodhi Seed mala are very similar. Amber or petrified tree sap are also very popular and they can be up to 40 million years old. The crystal mala of Chenrezig a favourite of mine symbolises the lifting of all beings out of the conditioned world.

Lifting all beings out of the conditioned world is exactly what we do symbolically as we walk around the beads with our thumb. Similar to how we walk a cora or around stupas one should move clockwise around the beads and pull them toward you. We may even imagine that all beings who suffer and have difficulties are down on the beads we have not counted, and one can pull them up one by one towards enlightenment and happiness. Counting in a counter-clockwise rotation is ok when reciting or meditating on a Father Tantras, and clockwise for mother tantras. When we finish a complete round we turn the mala over with our wrist, we do not count across the guru and stupa beads. This is likened to walking through the Buddha’s house. As we do this as we are building up an energy field and we keep pushing it towards the guru bead. Generally, men hold the mala in the left hand to help develop female qualities such as wisdom and women hold them in the right to develop male qualities like bliss. This is just like many Buddhists wear blessing strings on their left and right wrists.

There are even rules of etiquette concerning malas. Likely the most common rule is that the mala should never touch the floor. Depending on how you hold your mala it may difficult to keep this from happening, but if it does touch the floor it is common to see practitioners touching the mala to their forehead as an act of blessing or purification. Some people think that lending their malas to someone else is bad luck and some think that lending helps the blessing grow. I think it is always a good idea to be generous and share. It is also considered good style if your mala fits into your hand if it is too big you might be trying to be too holy. An exception is the dob dobs or the discipline monks in charge of controlling the young novice monks they had long and heavy malas to swat at or spank the children if they misbehaved.

The main use of the mala besides counting mantras during meditation is to bring the body, speech, and mind together. This unity of our body, speech, and mind is a central practice in many meditations. Holding the mala and mindfully pulling one bead at a time towards you is a Shiné practice as it can help to calm the body and then through the stillness of the body, the mind finds stillness as well. Furthermore, if one is distracted during the meditation one will almost naturally continue to move along the beads, this physical activity is a gentle reminder to come back to your focus and return to the meditation in full concentration.
It is hard to imagine Buddhism without a mala as it is symbolically rich in nature and intertwined with meditation practice. Feel free to ask any questions about malas in the comment field below.

3 thoughts on “How and why do Buddhists use a Mala?”