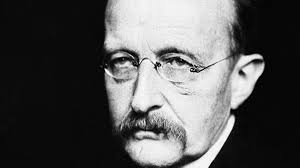 As a man who has devoted his whole life to the most clearheaded science, to the study of matter, I can tell you as a result of my research about the atoms this much: There is no matter as such! All matter originates and exists only by virtue of a force which brings the particles of an atom to vibration and holds this most minute solar system of the atom together. . . . We must assume behind this force the existence of a conscious and intelligent Mind. This Mind is the matrix of all matter.

—Das Wesen der Materie (The Nature of Matter), a 1944 speech in Florence, Italy.

We have been ignoring modern science for more than 100 years now in the struggle against impermanence of all things composite. We glorify everything material and honour those who can amass the most. We could not be moving in a such a completely wrong direction as a species, how could we misunderstand or even ignore such a clear and concise description of the material world, from one of the most preeminent minds ever, as this? What did Max see on his blackboard filled with equations erased and scratched over once again that could lead him to such a profound observation such as this? After his years of study experimentation and research and this is how he sums it all up in the final years before the end of his life by saying consciousness is the root of all there is, there is no thing behind it.

Let us compare his summary to that of another scientist, not a normal scientist but a scientist of the mind, the third Karmapa. Rangjung Dorje born in Tingri Tibet in 1284. He studied mind within the laboratory of meditation. His professors were highly respected monks from a very long tradition of mind exploration dating back more than two thousand years earlier to old India, the birthplace of modern science. Well, we haven’t recognized it as such yet but one day we must, the Greeks as great as their minds were, only recycled what they had learned in the east, and claimed much of it as their own. Anyway, I digress. Karmapa wrote a song of Mahamudra, I put forward two verses for our comparison of these two masters of intellect.

Verse 9: All phenomena are projections of the mind. Mind is not “a” mind; the mind is empty in essence. Although empty, everything constantly arises in it. May precise examination sever mistaken views of the ground.

So we can surmise from both Max and the Third Karmapa that everything comes from mind. Max did not say where things go when they cease to exist but today we can logically infer that they must go back to where they have come from, as the Karmapa said.

Don’t you find this comparison interesting, from two totally different times and sources that are saying almost the same thing. It begs us to look deeper and just outside but within as well.

2 thoughts on “The Mahamudra of Max Plank”