Science, Jesus and the Buddha why can’t we just get along. I love WordPress immensely and the real sense of community that one with a little work can find here. Unfortunately, some of us are not so community orientated and like to bash others a bit, so what I would like to explore a bit is why it seems that Christians seem to want to single out and demonise Buddhists. Strangely enough, Christians do not seem to bash Islam or Hinduism hardly at all. Personally, I think this is strange because generally, Christians are great people they develop amazing Christ-like compassion and love. So why would they spread false information, call us idol worshipers and often even worse?
So why can’t we get along and respect each other and move forward with the things we agree on? Certainly what we agree on is more important than what divides us. Can we learn something from science in this area?
It seems to me that science stays out of the mess likely because you cannot prove dogma and we the religious ones simply cannot get along without our dogma. I would want to stay out as well if I was a scientist. So this asks the question what is dogma? A quick google search says “a principle or set of principles laid down by an authority as incontrovertibly true.
“the Christian dogma of the Trinity”
synonyms: teaching, belief, tenet, principle, precept, maxim, article of faith, canon;”

Wikipedia goes a little further to say: “Dogma is an official system of principles or tenets of a church, such as Roman Catholicism,[1] or a philosophy such as Stoicism.

Dogma is transliterated in the 17th century from Latin (Latin dogma) meaning “philosophical tenet”, derived from the Greek ‘dogma’ (Greek δόγμα) meaning literally “that which one thinks is true” and ‘dokein’ (Greek dokeo) “to seem good.”[2][3]

Dogma refers to positions such as those of a philosopher or of a philosophical school, or in a pejorative sense referring to enforced decisions, such as those of aggressive political interests or authorities.[4][5] More generally it is applied to some strong belief that the ones adhering to it are not willing to rationally discuss. This attitude is named as a dogmatic one, or as dogmatism, and is often used to refer to matters related to religion, but is not limited to theistic attitudes alone. In Pyrrhonist philosophy “dogma” refers to assent to a proposition about a non-evident matter.”

Or paraphrased “a dogma is a strong belief, principle, or set of principles laid down by an authority as incontrovertibly true that the ones adhering to it are not willing to rationally discuss.” This is quite telling for me as many of the discussions I have had online with Christians were not rational, logical, or at the very least objective. Many also do not even engage in dialogue. Commonly what one gets is that the Bible says this or that and that the Bible is the unquestionable word of the Christian god no matter how it may contradict itself and all reason it is the source of absolute truth. Circular logic and non-sequiturs are commonplace as there is no thought process behind the seemingly blind belief or faith. And to be honest I have like any other human my own beliefs. But I understand that beliefs or faiths do not need to rational or logical as long as one recognizes it as such and keeps it to oneself and does not force them on others or use them to discredit others. 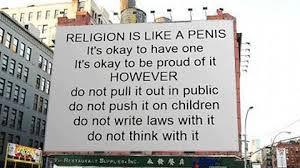 How does science deal with dogma? Science’s job is to ask meaningful questions, formulate hypotheses, and test them to the best of our ability with objective clarity and non-bias. This is not an easy challenge to stay rational and it simply demands logic and objectivity, the very opposite of what this system of religious dogma gives us. While scientific dogma does exist in the hearts of men and their favourite theories the very basis of science requires that when a new discovery is made and found to contradict a previously recognized truth the new discovery is subject to peer review and when warranted it is accepted by the review and the general community as a whole accepts it. But this can take time as the minds of men can become hard to change, but it can and does happen. Just think how long it took us to understand that the earth was not flat since the ancient Greeks theorised in the 6th century BC.

This is completely different from what we see in the three Abrahamic faiths all originating in the Middle East. Proponents of these “ideas” seem perpetually stuck in the idea that their version of the “truth” is the only one and the others are going to hell if they do not subscribe, swallow, or accept it. Worse yet many wars have been fought and will continue to be fought on the basis of irrational dogma and people who are incapable of rationally discussing and analysing their strongly held beliefs within and out from their respective communities. This downward spiral continues as long as those sacred beliefs are held to be true. This holding on to beliefs in spite of knowing rationally that there is no evidence to support them not only creates divisions where no divisions need to be but it suppresses any other new ideas from coming forth and to be developed for our society. This intolerance blossoms into anger, jealousy, and finally hate. The results of which the world knows all to well today when a terrorist expecting 72 virgins on his death walks into a crowded area and blows himself up along with all those around him. And why do we ask? Dogma. We see the same effects mirrored when a community of Palestinians is bulldozed to make way for Zionist condominiums and when Coptic Christians are beheaded by the fanatical ISIL in front of their place of worship in Egypt. Why can we not see the connection between stone thrower in one life and missile launcher in the next life. No matter how you look at it, it’s a simple textbook case of my book is more correct than yours when all the while they are worshipping the same god.

How does the Buddha Dharma and those who truly practice it deal with dogma and strongly held beliefs? Well for starters Buddhists do not proselytise, or witness to others, so to speak in a Sunday Term. Instead of commandments, we have advice. And the beliefs Buddhists do hold are not forced upon those who practice and there are no good or bad ideas just the impartial results that these good or bad deeds develop into, in our lives. The entire system of the eightfold path, four noble truths and all the sutras and tantras are designed to help us on the way and then once we have arrived they are to be discarded, every last one of them, everything is seen as impermanent. It would be like if you were climbing a mountain for example. Imagine that there is a river in the way between you and the top, you need a boat to cross the river to get to the other side but you do not carry the boat to the peak of the mountain, now do you? In fact, the Buddha himself was only a man and he taught that none of his teachings should be taken as the truth just because he is the Buddha, and further said that they should be tested for ourselves against our own experiences for truth. This sounds a lot like the scientific process to me. If there ever was a dogma in Buddhism it is that there is not supposed to be any dogma whatsoever. In fact, it is entirely possible to be a Christian and a Buddhist from the Buddhist perspective. 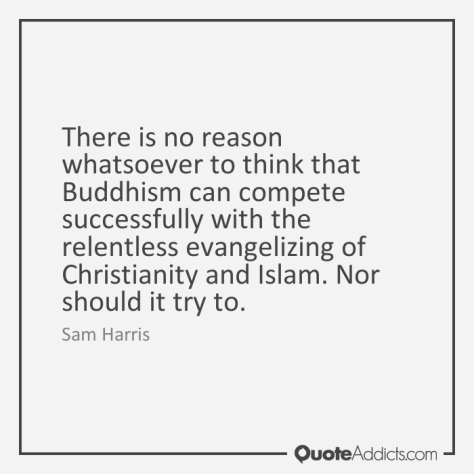 So what is it that Christians see in Buddhism that seems to be so threatening that in spite of other more deserving opportunities for them to fight against like violence, crime, and war? Could it be that what they see in the Buddha Dharma is the very same message that Jesus brought to the church in his reformation of the old Pharisees and the Scribes into a religion of forgiveness, compassion, non-violence, wisdom, and love for all? Are they reacting the same way that the Pharisees and Scribes did? When we minus all the violent genocidal baggage of the old testament most of the new testament is quite acceptable, maybe there is room for perhaps a third testament, after all the teachings of the Buddha and Jesus were not so different in their purest essence when all the hellfire and brimstone are left aside. The recent rise of curiosity to the eastern religions or wisdom traditions as of late for me represents a very humanistic/religious revival of sorts. Yoga schools, Buddhist centres and mindfulness teachers are popping up left right and centre. One can, of course, thank the well-laid foundation of freedom that we have from our Christian forefathers for this wondrous gift, maybe they feel threatened by Buddhism. As they see the positive growth and lasting change in Buddhist friends and even perhaps in other lands. The growth of the Buddha Dharma in the west is sure to keep on getting stronger and stronger as the critically thinking, well educated, and spiritually minded keep searching for lasting joy and wisdom in an ever more violent world of dogma and discourse. It seems to me that if science can help us it could only happen through education supported by the non-dogmatic discovery of meaningful scientific truth for the benefit of all living beings.

6 thoughts on “Science, Jesus, and the Buddha why cant we just get along?”